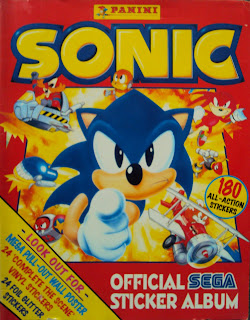 A look now at the Sonic sticker album from 1994, back when Sonic was the only game in town and everyone and their mother was playing Sonic 3. Nowadays in 2010 there is a new Sonic sticker collection for us to get excited about (or not) as it seems to offer less game screenshots and more coverage of all the friends Sonic has acquired over the years. I remember when the addition of Knuckles seemed like too much. 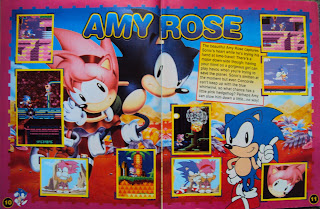 But it got me thinking, there has been so many Sonic games released in the last ten years that it would probably be far stranger for people to see a Sonic game that didn't include a million wacky characters. For all I know Sonic Riders could have sold more copies than both Dreamcast Sonic Adventure games put together. 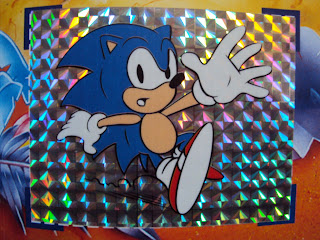 Wooooah there Sonic! By the end of the year we should be able to download Sonic 4, it looks pretty good from the videos and screenshots. Plus it only has Sonic in it, so far anyways, but it remains to be seen if this is a game like the Sonic games of old or a game that just reminds you of what you liked about those games while brazenly taking your money and blinding you with speedy HD craziness. 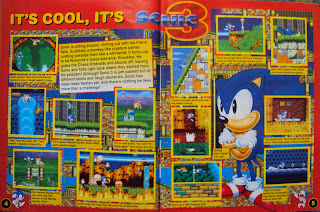 Sorry, where was I? Ya, the sticker book, its wall to wall Sonic game screenshots, almost, there are also some Sonic the cartoon stickers in there with the odd foil sticker. Not forgetting the 4-page pull-out poster that came in the centre of the book. At the back there is a puzzle page, containing a wordsearch, a maze and some spot the difference pictures. 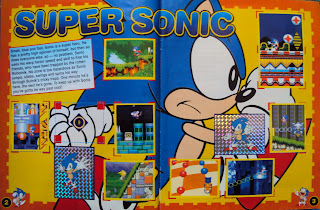 I never filled the whole album, there is nearly always one missing on every page. So frustrating! So has anyone got any spares? Maybe I will pick up that new Sonic album if I come across it after all.
Thats it for the videogame related albums for now. Next up, I make an impassioned plea for help to complete my Saved by the Bell sticker collection!
Posted by G at 26.5.10 3 comments: 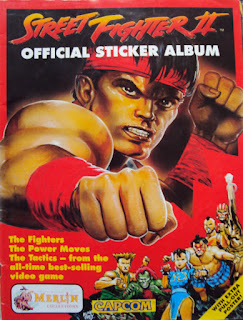 Now a look at both Street Fighter Sticker Albums, first the original. This album has some great Oli Frey artwork all the way through, whether as the background or as some of the stickers. Frey did a lot of Street Fighter covers for various games magazines at the time too. 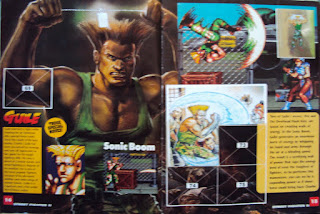 Like everyone else at the time I played the arcade version, then couldn't wait for the home conversions. Unfortunately the one button C64 tape version I got didn't quite match the arcade machine. I still played it to death though. 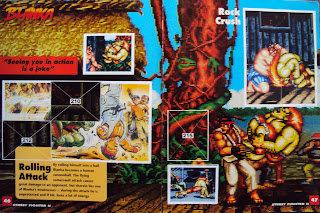 But later I got the Special Championship Edition for the Megadrive and played that to death! I would also go as far as to say that it's the better of the two. 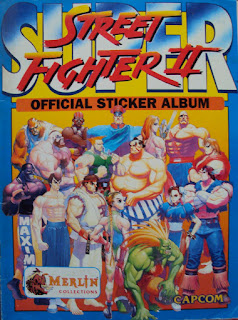 Not long afterwards Capcom released Super Street Fighter 2 and Merlin were hot on their heels with the sticker book. This Super SF2 release introduced us to four new characters. Boring caricatures in my opinion, except for Cammy because she's only the second female in the game. 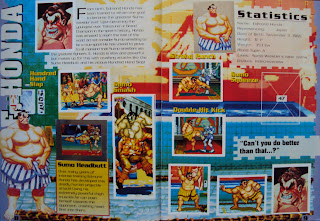 Gone was the Oli Frey artwork, replaced with pictures and screenshots from the game, interesting if you loved playing Street Fighter, ... but not that interesting. 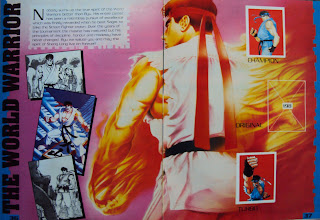 It did have some Ryu artwork at the back showcasing various iterations of the game. No Commodore 64 version this time sadly. And no Super Street Fighter 4 stickers to collect after this years big release. What ever do the kids collect these days?
Posted by G at 25.5.10 7 comments: 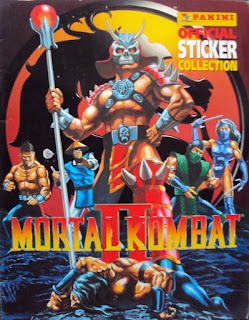 A quick look at the Mortal Kombat II sticker album this time, I didnt get too many stickers for it so only a few scans . I always preferred Street Fighter as my fighting game of choice back then, Mortal Kombat just never impressed me. 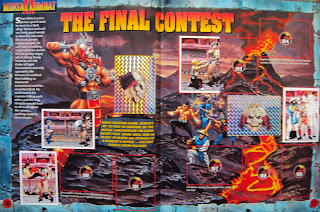 Stickers were mostly screenshots with the odd hand drawn character foil sticker, so nothing too interesting then. 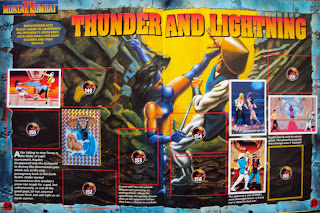 Each page has an action packed scene from the Mortal Kombat game (kind of) as a background. The art is fine but not as good as the Oliver Frey art you find in the Street Fighter 2 sticker album, which I will post up later. 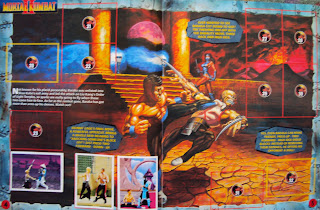 I always picked Johnny Cage, then they went and killed him! Ultimate Mortal Kombat 3 would be my favourite of the MegaDrive games and I haven't really played any after that. There must be a million characters in the MK universe now but no sign of a new sticker book.
Posted by G at 22.5.10 1 comment: 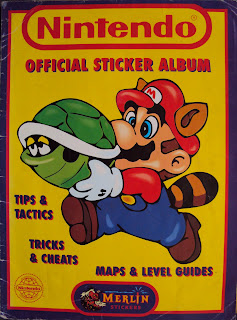 Back in the day sticker collecting was hugely popular (is it still popular?). Here is a look at some pages from the Official Nintendo Sticker Album. It was released around the time of Super Mario Bros 3 and the release of the original Gameboy. This must have been one of the first videogame related sticker albums, as it predates all the other ones I had, Sonic, Street Fighter 2, Mortal Kombat 2 etc. but we will get to those later.

It acted as a guide to all the Mario and Zelda NES games along with some of the Gameboys early releases, it was usually stickers of screenshots of the game with some gameplay hints, some stickers were of the characters in the games, some drawn better than others!

This is the centre page, I only managed to get one foil sticker for it, how embarrassing! The next page was of various NES and Gameboy games you could buy right now, don't you just hate missing only one sticker on a page.

Golf on the Gameboy, has anyone got sticker No. 244? Super Mario Land, some pages had a map of the game to help you see screens that you had to play through. 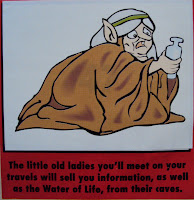 The first Zelda, the maps were a great help, no more aimless wondering. I don't remember the old ladies being this creepy in the game though!

Zelda 2. Note the lack of best scores written in, I never had this game as a kid, it looked good in the sticker book though. 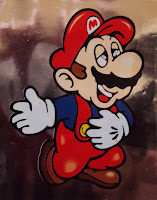 Can some one tell me is Mario drunk/in love/stoned or what?
After 20 years I've finally given up hope of completing the album, the local shop that I got my packets of stickers from probably wont be ordering them in again as it closed down about eight years ago.
Posted by G at 20.5.10 4 comments: 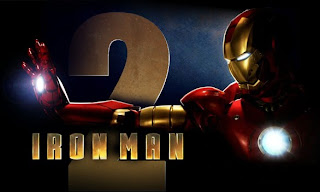 This month’s big release and currently raking it in at the box office is Iron Man 2. Robert Downey Jr. once again plays billionaire industrialist playboy Tony Stark. He is joined once again by Gwyneth Paltrow and John Favreau. In the sequel Don Cheadle takes over the role of Iron Mans friend War Machine from Terrence Howard. Howard apparently had a falling out with Marvel after the first movie. Both fine actors and Cheadle does a good job as Tonys friend caught between the government and their friendship.
The main baddie of the movie is Ivan Vanko, a jilted Russian scientist who is out to ruin Tony Stark at any cost. He is played by Mickey Rourke, as a man of few words and even fewer resources until he is helped out by Tonys rival industrialist billionaire, Justin Hammer. Hammer is played brilliantly by Sam Rockwell. Every time he is on screen it’s a joy to watch.
Smaller roles are given to Samuel L. Jackson as Nick Fury trying to convince Tony to join the Avengers, Scarlett Johansson pops up as Nick Furys spy Natasha Romanoff. Tony Stark does have a soft spot for beautiful women. 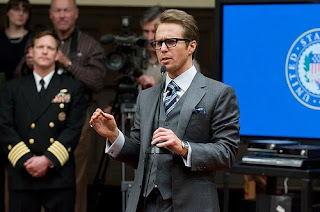 If you liked the first movie then chances are you are going to love this second one, in my opinion the sequel is the better of the two. You get a great turn from Robert Downey Jr., could you really see anyone else playing Tony Stark? Rockwell is excellent as Justin Hammer and I hope he returns if there is to be another movie made, which there will be I’m sure. The story fleshes out this whole Avengers Initiative that Marvel is working toward while showing us more of Starks life, his relationship with his father, his alcoholism etc. It’s a much more rounded movie.
Two things did disappoint me with the film though, I had looked forward to seeing Tony Stark racing his Formula 1 car around the streets of Monaco but as soon as he sat in to race; Whiplash was tearing up the track! That’s a minor gripe, I know. Also the BIG end battle against Whiplash and all those Hammer drones was painfully short for my liking. They all looked impressive but it was missing a bit of mecha action in my mind. Not big enough complaints to turn you away from the movie though. 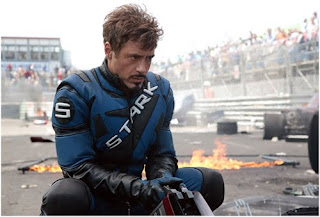 It’s written by Justin Theroux who also did Tropic Thunder, so there are lots of funny lines in there. Garry Shandling as Senator Stern trying to get Stark to hand over his Iron Man suit to the government has some gems. Along with Tonys usual quips and putdowns which are very clever, or maybe Downey Jr. is just so good at playing the prick we let him get away with it. Either way this is a great movie, definitely worth seeing and leaves a lot of scope for a third movie which hopefully won’t turn out like recent third movie comic book outings, X-Men, Spidey I’m looking at you!
Posted by G at 20.5.10 No comments: