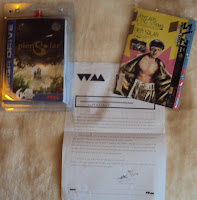 2011 has arrived and it brings with it the long awaited release of the latest MegaDrive game, Pier Solar from WaterMelon. Who have spent many a long hour developing and working to publish this title. It was sent out to those who ordered it over Christmas, but as the weather was playing havoc with deliveries, I didn't receive my copy until the middle of January. The extra few weeks wait was not so bad considering it had been originally paid for in 2008! Pier Solar was due out for Christmas 08, but due to some hiccups it was delayed and pushed back until its release a few short weeks ago. Above shows the blister pack it came in and the letter and mini strategy guide that were included. I got the Pal MegaDrive box, you could also order a Japanese MegaDrive box or a red Genesis one, though the game plays on all versions. 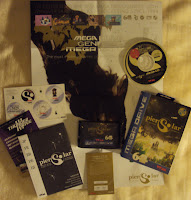 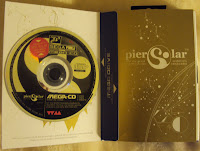 This is one of the best put together game packs you will come across, really professional but still clearly a huge labour of love. Here is a pic showing what comes inside the box plus a look at the cartridge and the additional Mega CD, which includes the music for the game if played inside your Mega CD when playing the game cartridge (A First?). My MegaCD is stored away, along with my 32X, so will have to wait to see how it works. Putting the CD in your computer brings up extras such as photos, concept art and the musical score.
Along with the CD you get a poster, a sticker sheet, a flyer for an upcoming 32X game, some instructions in all the languages the game comes in. You also get a signed card showing what number of the game you were issued out of the initial 800 made. I got the magical number 42.

This shows a map from the game inside the strategy guide which is inside this mini Size magazine that also has some interviews and comments from the developers.

If you look closely you might just be able to pick out my name in the last pic! Everyone who paid for the Posterity package got a mention in the Pier Solar book at the front of the box. A very nice touch.
Apologies for the quality of the pics, only just got a new laptop, more on that in another update (Oh the trouble I've had!). So I haven't hooked up my scanner properly yet. Also the following screenshots are just quick grabs from my TV showing that I have played it, and will hopefully talk more about it when I get a good number of hours in. I think you'll agree it does look pretty good.
Here is a bigger shot of the flyer advertising Super Thunder Drive III, an upcoming 32X release. Although there is a belief that this game is a hoax, no-one having heard of Super Thunder Drive. But why would you bother promoting it? I hope it turns out the be the real thing. The 32X is short of games and as my legion of followers will know, it's one of my favourite systems. Plus is there an Easter Egg in Pier Solar if played through a 32X?

I have also picked up Blue Almanac for the Japanese MegaDrive, the only other game I've picked up recently to be honest. As you know this game was not released outside of Japan, but it is being translated by SuperFighterTeam, those of Beggar Prince and Legend of Wukong fame. They have renamed it Star Odyssey and it will hopefully be able to order soon.
Here are the websites, so check these games out for yourselves.
http://www.starodysseygame.com/
http://superthunderdrive.com/
Posted by G at 24.1.11 1 comment: