Video Game Ads from comic books of the early to mid 80s, Part 1

I have a large selection of comics going back a number of years, and while thirty years ago kids seemed to be excited by remote control cars, offers of posters of John Travolta, or body building equipment?? Eventually video games start to creep into these pages. So the next number of posts will focus on the ads from the early eighties to the late nineties. It gives me an excuse to use my scanner (yes, it does work) and to look over some classic Swamp Thing and Legion of Super Heroes comics. Aah, the days when Marvel and D.C. didn't need an earth shattering event every six months to screw with continuity and generally mess up their universes. 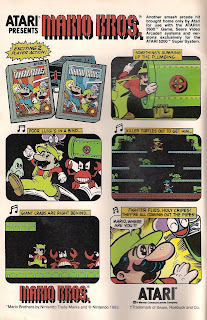 Atari presents Mario Bros. from 1983. It promises exciting two-player action for your Atari 2600 and 5200 in an arcade port of some sort of plumbing simulator, it'll never catch on. 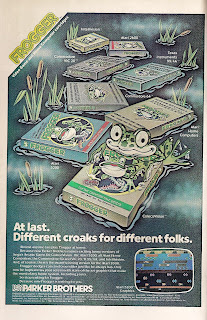 Wow, Frogger was so popular it had to be released on no less than 8 different systems! The Sega arcade hit from 1983 really could not be avoided (insert traffic reference here). At least they show an actual screenshot from the Atari 5200 version in this ad rather than a sneaky artists impression of what the game kind of looks like that some ads go for. Which of the eight versions is the best? Hell if I know! You wonder why there was a videogame crash! 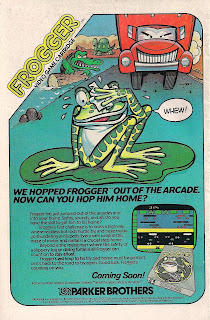 Here is a spread for Frogger from a year earlier for your Atari Video Computer System. This contains the artists depiction of the game in action. This must have driven Frogger fans into a near frenzy. It's just like the arcade!! Coming Soon! Parker Brothers promised, with little indication that it would spawn (get it?) so many Froggers. 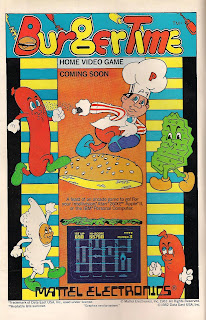 Burger Time was another conversion of an arcade hit, this time by Data East, that would be coming soon to pretty much any system you could possibly have connected to your monitor or TV. It does come with a health warning though, "Graphics vary by system". Why be a knight or a space marine, when you could be a chef flipping burgers? 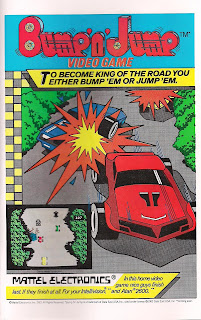 Look, it's pretty straight forward, you either bump'em or jump'em, there is no third option. Race'em? Don't be stupid, where's the fun in that exactly? Mattel Electronics bring another Data East coin-op to the home with versions for both the Intellivision and the Atari 2600. Mattel bring Advanced Dungeons and Dragons to your Intellivision. Ignore the archer with the impossibly wide stance trying to down the big green monster and look at that screenshot. Is that a snake? jewel? castle? wolf? Use your imagination... but I don't think the Intellivision control pad has enough buttons to keep up with my imagination! 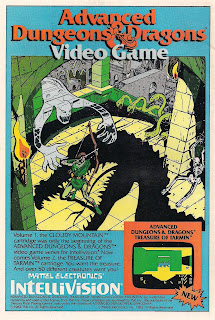 The sequel to the first AD&D, Treasure of Tarmin would be released by Mattel not long after the first game, which was called Cloudy Mountain apparently. Again for this ad, ignore the archer surrounded by nasties, holding a bow that's taller than he is, and look at that in-game screen. Is that a spider? a Catoblepas? a blue polyhedral dice eating monster? Holy crap it's like Doom with arrows.
Posted by G at 15.7.11 No comments: 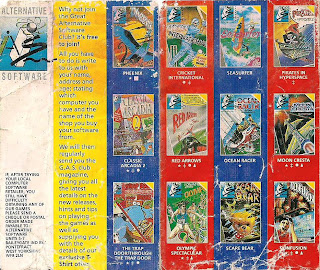 Alternative Software released games across all the 8-bit and 16-bit computers in the late eighties and early nineties. (They are still going strong today, but seem to have an unhealthy obsession with rugby league games!) They released games for a budget price, usually new releases covering popular kids tv characters of the time, SuperTed, Fireman Sam, etc. Or re-released older games by other companies for the not unreasonable price of £2.99 or some for the shockingly higher price of £3.99.
Here is a look at a selection of games they had for sale in their catalogue all those years ago. I think I remember finding this in a copy of Popeye 3: WrestleCrazy. Popeye+Aliens+Wrestling=What could go wrong? Zzapp didn't think this game was up to much. It was a colourful if a little basic one-on-one fighter, one that I never loaded up more than a handful of times. 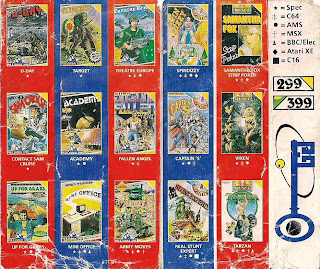 It invited you to join the Alternative Software Club for free, so you could get all the information on new releases. Plus if there was a game you wanted and couldn't find it in the shop, just send a cheque or postal order off for £2.99 and it would be sent straight out to you. Don't get too excited C16 owners, as there are only two games in this catalogue for you, Pheenix and Real Stunt Expert, oh well! 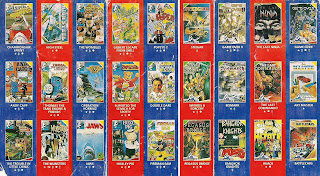 Strangely, with this being bundled late in the day of the C64s life with Popeye 3 and after they had carefully labelled the price for you to be able to order games off them. They seem to have made a mistake with the Swords and Sorcery game. Or did they? It shows itself here as being available for the Speccy, Amstrad CPC and the C64. (middle row, fourth from right) Now this game was released originally by P.S.S. in 84/85 for both the Spectrum and CPC. Games That Werent 64 list it as never having been released for the good old 64. See here - http://www.gtw64.co.uk/Pages/s/Review_Swords.php So is this just a mistake or did Alternative port a version over to sell for the commodore when they picked up the rights to the game? Unlikely, but I guess we can live in hope until the truth is revealed. 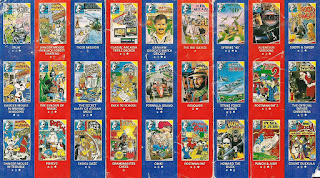 At the budget price and the quality of some of the re-issues, there was barely a C64 owner who didn't have at least one Alternative game in their collection. As for Popeye 3, maybe I should give it another whirl. In my youth I was blinded by the need to play WWF European Rampage Tour which was awful, and so easy to complete too. I mean Popeye 3 is at least better than the Amiga version isn't it? Score One for the 64!
Posted by G at 2.7.11 No comments: