Video Game Ads from comic books of the early to mid 80s, Part 2

The second part of our look at some advertisements from the early to mid eighties. 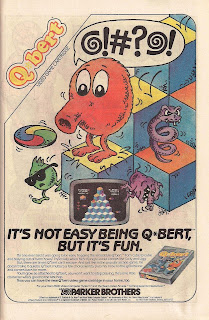 Here Parker Brothers bring foul-mouthed Q*Bert to your Atari. The screenshot alone should be enough to have you rushing down to the shops to buy it. 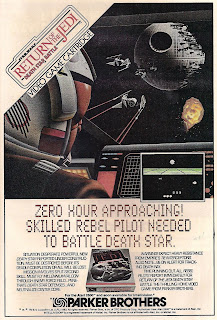 This is an advertisement for Star Wars: Return of the Jedi tie-in game, Death Star Battle from 1984. A game where you fly the Millennium Falcon through an enemy force-field before taking down the evil Death Star. All in glorious Atari 2600 graphics! Now why doesn't George Lucas go back and tinker with games like these, they were surely not what he envisioned? 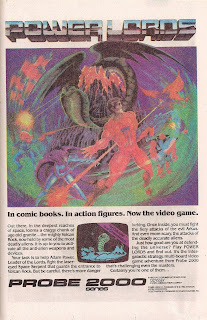 Power Lords is a game released in 1983 for the Magnavox Odyssey 2 and announced but never released for the Colecovision. It is based on the toy line and comic book that was around at the time. The toys were generally crap looking and the comic only lasted three issues, so that's why no-one remembers this flop series nowadays. This game is pretty rare I believe, being one of the last games released on the Odyssey. 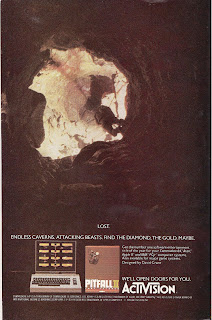 The sequel to the much loved Pitfall by David Crane arrives for your Atari, Apple, IBM PC and from the Ad above, the mighty C64. Pitfall II Lost Caverns did away with cartoon representation of platforming and instead went with a picture of a man entering a cave. Every young boys dream in the early eighties I'm sure. 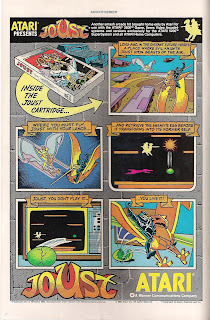 Long Ago, In the Distant Future?!? Joust comes to your home Atari systems. The arcade hit is so popular they don't need screenshots to show whats going on, as presumably everybody knows already how to steal giant eggs. For you see as it says... You Don't Play It... You Live It! 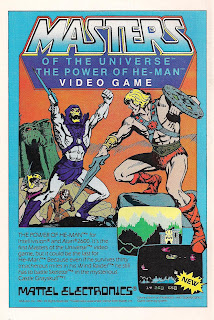 The Masters Of The Universe game from Mattel on Intellivision and Atari 2600. The Power of He-Man uses SuperGraphics to bring your battles with Skeletor to life, or as near was possible on the Intellivision anyways. You got a free comic when you bought this too if I remember. 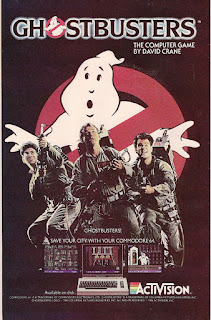 Ghostbusters, the box-office smash hit movie gets converted to home systems by David Crane for Activision. Here we finally get some screen shots of the game in action for the Commodore 64. Brilliant game, brilliant movie, what more could you ask for?
Posted by G at 1.9.11 No comments: