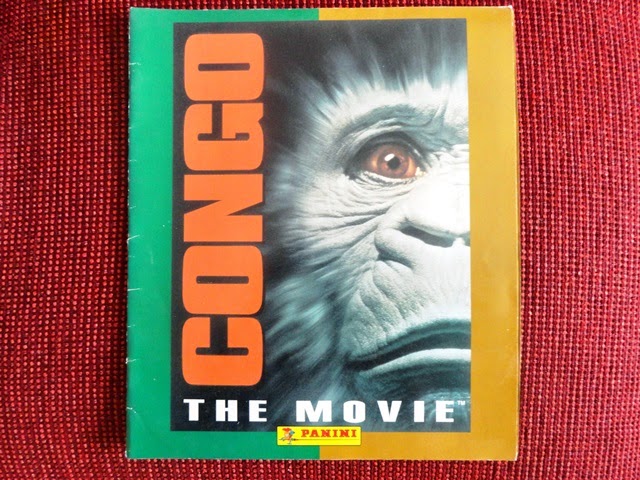 Here we take a look at Congo: The Movie sticker album from Panini, which was released to tie in with the film in 1995. I went to see this movie in the cinema when it came out and thought it was great. It is still one of my favourite movies. I know it didn't get a good response from critics, but I thought it was a good adventure yarn set in the wilds of the African jungles, something you don't see a lot of in movies these days. It also had a number of good actors in the cast, while Tim Curry hams it up good and proper as the villain, though villain is too strong a word for his character really.
The screenplay was adapted from a Michael Crichton novel of the same name, so I think people were expecting a special effects extravaganza along the lines of Jurassic Park.
I never completed the album unfortunately (anyone got any spare stickers?). They don't really make sticker books for movies like this anymore. These days it seems to only be animated or comic book movies which get collections.

There was a 4-page fold out poster in the centre of the album which held a number of stickers. I'm afraid the minute it was completed it was taken out from the centre pages, probably to be stuck to a wall or a door somewhere. Either way, now I have no idea where it is!
I also bought this film on VHS tape when it came out and I'm sure I have it on DVD laying around the house here somewhere too.
On top of this I also got my hands on the Congo videogame for the SEGA Saturn. It was only released in America I believe. It is a rather good Doom-type game, if you like those sort of games (which I do).
﻿﻿